After a 25-year career as a marketing executive, including stints at Mindbody and Digital West (now part of Astound Business Solutions), Meg McCall took a big risk and decided to manufacture and sell a product, the very first of its kind.

The concept was an adaptive kayak paddle, designed to help people with strength or mobility limitations paddle independently. Meg’s father, Jim Van Gompel, a prolific retired mechanical engineer, had originally developed the paddle for himself. “My dad was very active and loved the outdoors, but in his 80s he had a laundry list of health problems, including severe asthma, heart disease, and diabetes,” says Meg. “He wanted a solution that wouldn’t tire him out so quickly, so he created this energy-efficient paddling device he called the ‘angle oar.’”

The system is comprised of a mount that attaches to the kayak cockpit and holds the weight of the paddle, reducing stress on the paddler’s shoulder, back and joints. Jim then designed the paddle to rotate around a central support post and angle downward on both sides, resulting in a smaller range of motion while paddling.

“Once I felt how effortless it was to paddle through the water, I knew it held great promise,” notes Meg. That’s when the lightbulb went off and she decided to launch Angle Oar, the company.  She and Jim continued to fine-tune the design, and Meg suggested Jim add the ability to use the paddle straight as well as angled. 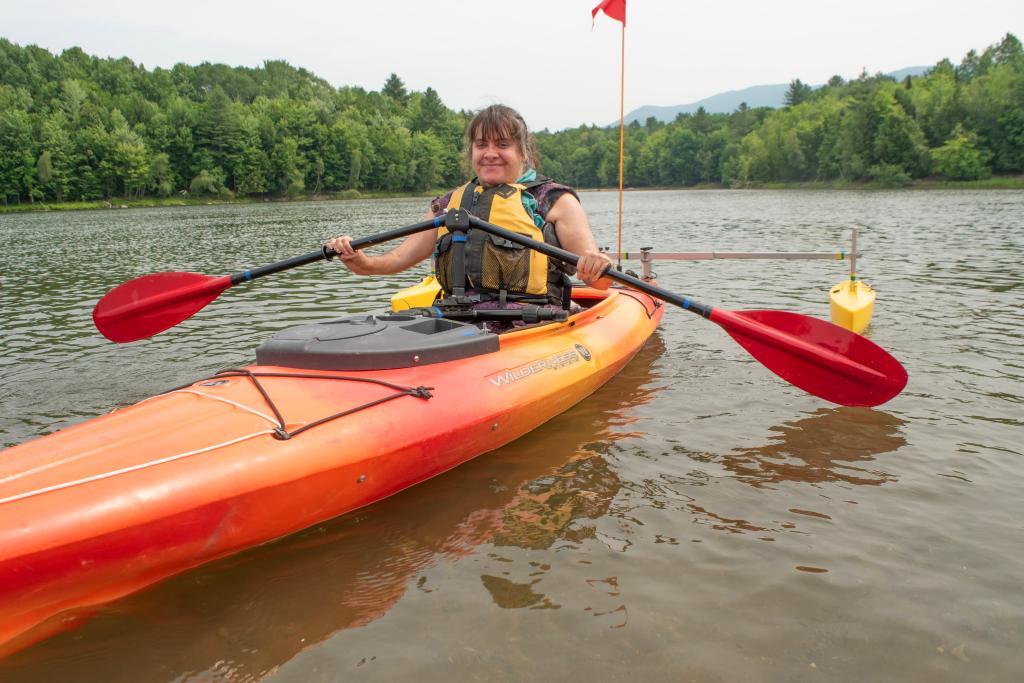 Meg attended several SCORE workshops in 2013 to learn how to properly register Angle Oar as a business, establish an LLC, and set up her financial accounts. SCORE matched her with a mentor who introduced her to local manufacturing contacts. She also connected with the Cal Poly Adapted Paddling Program.

For the first three years, Meg says, she focused on building her network in the kayaking industry, filing patent applications, and prototyping and testing numerous designs. “The most challenging part was designing a mount that would work with a wide range of kayaks. We went through 12 different designs before we settled on one,” she explains. “At the 11th hour, I called my dad expressing reservations and told him I wanted to abandon it. Wouldn’t you know, one week later, the two of us came up with an entirely new concept, and it ended up working wonderfully!”

Sales were very modest during the first two years. “Adaptive kayaking is a niche in the broader paddle sports industry,” reports Meg. Fortunately, due to her early networking efforts, Meg had made strong inroads with many adaptive paddling programs, and they became her early adopters. From there, in conjunction with grassroots and content marketing, Angle Oar’s e-commerce site began generating more traffic and consumer sales.

That was roughly six years ago. Since then, Angle Oar has gained a sizeable following and is considered a leading authority on adaptive kayaking. It now offers an entire line of adaptive paddling products. In addition to its original product, the Versa Paddle, the company manufactures the Gamut Paddle Holder and resells several other adaptive products, such as outriggers and kayak carts.

Angle Oar has secured three patents, and in 2020 its two signature products were included in Paddling Magazine’s 7 Best Kayak Paddles for 2020.

More importantly, feedback from the people who use the products has been overwhelmingly positive. Meg tells us she’s heard more than once from people who are quadriplegic, telling her kayaking with the Versa Paddle is often the only thing they can do independently that doesn’t require a wheelchair. She often receives deeply moving notes, like this one:

“I have a cervical spinal cord injury… The equipment you created has given me the opportunity to again know the peace and joy of being on a lake and experiencing the beloved outdoors in a very up close and invaluable way. (… there are no words to express the difference it makes in my life. I literally carry the joy of that day with me for months thereafter. And that is no exaggeration.”

“Our customers include people who’ve had strokes, amputees, and people with various forms of paralysis. Since we introduced the Gamut Paddle Holder, we’ve attracted more mainstream, experienced kayakers who are getting older and have arthritis or shoulder problems, yet don’t want to give up the sport they love.”

Meg contacted SCORE again early in 2022 for guidance in expanding her sales and distribution initiatives. She’s also gearing up for her next production run and has made good headway in several new market segments, including rehabilitation and VA clinics, parks programs, and several international regions, including Canada and the UK.

“We’re still just a small mom and pop, but all the indicators are looking positive. Almost every day I wake up excited about what new thing I’m going to learn or do today,” Meg says, enthusiastically, adding, “And I’d say about every fifth day I wake up thinking, ‘Now where is the money going to come from to pay for that?’”